Subterranean termites are a highly destructive timber pest, causing major structural timber damage to domestic and commercial buildings in Queensland. Recent industry surveys suggest that about one third of all unprotected properties are subject to attack by termites. Severe termite damage to Australian homes is on the increase due to recent changes in the type of chemicals allowed to be used, building construction materials and designs that encourage hidden termite entry and infestation.
DESTRUCTIVE TERMITE RISK ASSESSMENT *

* Based upon CSIRO data and APCA national survey
Termites cause more damage to homes in Australia than fire, floods, storms and tempest, combined.
Home insurance does NOT cover the repair costs of damage caused by termites to a home or commercial building.
Termites occur throughout Queensland, with a high incidence of attack in virtually all urban areas.
Termites are small in size (about half the size of match-head) and soft bodied insects. They build a central colony nest from which they construct underground tunnels that radiate in a 100 metre radius from a central colony nest in search of a timber (cellulose) food source.
Termites can build a sub-nest in a wall cavity of a home .Termites often build above ground nests, where moisture collects in the wall cavity, from leaking pipes, showers etc.

Termites travel in mud shelter tubes as protection from predators, sun-burn and dehydration. Termites maintain a high humidity environment which is essential for their survival. Termites are highly secretive, preferring to enter a building through areas inaccessible to inspection, such as, through in-fill patios, fire heaths, expansion joints and cracks in concrete slab (on-ground) flooring.Termites can pass through a 2 mm crack or an expansion joint (eating through the rubber compound) between adjoining concrete on ground flooring. They can also travel under parquetry and floor tiles to get to the wall framing timbers.

The symbiotic digestive system that can destroy your home

Only the worker termite caste can digest timber by the use of symbiotic protozoa in their gut. Worker termites feed their partly digested semi-liquid food, regurgitated from their mouth or passing from their anus, to the other termites, a process known as trophallaxis.

Termites have a well ordered social system with amazing engineering capabilities and an acute survival instinct; they obtain moisture from the soil and moist decaying timber, and communicate using pheromone signals. The mutual feeding, constant grooming and close social habits of termites are used to advantage in modern termite control baiting systems.

Certain hi-tech termite baits recently introduced on the Australian market from the USA have a delayed lethal effect on termites which readily pass on the bait to other termites in the central colony nest during the mutual grooming and feeding.

Subterranean termites need to maintain a high level of humidity and temperature (25 to 35c) in their central colony nest. Termites eat through the centre of susceptible timbers leaving nothing but a thin veneer of timber and/or paint. They will pack mud in cracks and joints in timber to prevent loss of humidity and resultant dehydration.

The Biology of Subterranean Termites

Subterranean termites or & white ants" as they are often called are not ants at all. They are in fact related to cockroaches with a similar two hundred million year history. Within a termite nest there are members of different castes, each with a different role to perform. These include the queen, king, the winged reproductive (young kings and queens), soldiers and workers. 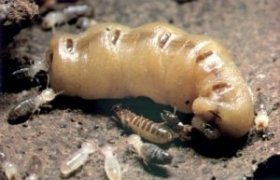 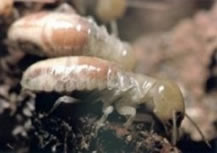 The King and Queen with worker termites

The queen following her hazardous flight and after mating becomes an egg laying machine; her body becomes hugely enlarged; she can live more than 25 years producing more that 2,000 eggs a day.

The king and queen live in a central chamber and are tended by the workers.

the one that does the damage; they are a creamy translucent colour, soft bodied and carry out all work in the nest, including gathering food (timber and other cellulose); constructing tunnels; repairing and enlarging the colony nest; grooming each other and feeding the soldiers, the king, queen and also caring for the young nymphs until mature.

Worker termites are 3 mm to 4 mm long, have no wings, are sterile and blind; work 24 hours a day for several years life span in some species.

The soldiers commonly have an orange coloured armoured head.

with mandibulate pinchers which they use to crush an attacker, such as ants; some have hard pointed snout which eject a white sticky latex to ensnare their enemies.

The soldier termite is usually the first to be seen in large numbers by the home owner when the termite workings (shelter tubes or damaged timber) are opened and the soldiers rush out to guard the opening whilst the workers repair the damage.

The swarmers (reproductives) are called alates

and are commonly seen when they swarm on a hot humid summer evening around dusk; they have eyes; are poor fliers but are swept along by the wind; they land, drop their wings, find a mate to become king and queen of a new termite colony.

The swarmers are emitted in their thousands when a mature termite nest is large and well established. They land , shed their wings and attract a mate by pheromone chemical signal. If you find swarming termites, it is a sure DANGER sign that a large termite colony nest is close by and thorough inspection of the property  by a          a  termite control expert is essential.

The Life Cycle of Subterranean Termites

It is essential for your termite control professional to properly identify the species of termite found in your property. Some species of termites found in trees, for example, will not attack dry seasoned timbers in a building, whilst others can be are highly destructive to such buildings in a short amount of time.

Commonly found throughout Queensland particularly in urban areas or where eucalypt gum trees are highly prevalent. 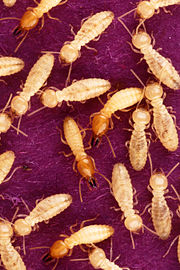 Nest location - Coptotermes acinaciformis are a very secretive termite species; they build their nest out of sight, often within the base of eucalyptus or other susceptible trees, or completely under the ground; often within an enclosed patio or under concrete (on ground) flooring which is ideal for moisture retention, temperature and humidity control within the termite colony nest. This species often build subsidiary nests away from the main colony nest. A subsidiary nest can be contained in a wall cavity of a building where there is a reliable moisture source, for example, from a leaking shower recess or faulty guttering or rusted down pipes.

HIGHLY destructive nature - Coptotermes acinaciformis are highly destructive to buildings and other timber structures. They are the most widely distributed and destructive timber pest in Australia. A single colony may consist of more than one million termites. A most voracious timber pest ... one to be taken seriously.

Commonly found in south east Queensland, a major termite species in the Brisbane and coastal region extending up to the Bundaberg region.

Nest location - Schedorhinotermes intermedius commonly build their nest in tree stumps; in the root crown of the living, dead and debilitated trees; under houses or within enclosed patios or other areas where timber has been buried or stored in contact with the soil.

Identification - Schedorhinotermes intermedius species tend to "gouge" the affected timber and has a fetish around nails used in construction. When you first find them, you will often see a major soldier (6mm in length) and a minor soldier (4mm in length).

Nest location - Nasutitermes exitiosus build a mound nest which protrudes 30cm to 75cm above the ground. Control can be as easy as knocking the top off the nest and a follow up insecticide treatment inside the nest.

Destructive nature - Nasutitermes exitiosus are destructive to buildings and other timber structures. Sometimes severe damage may occur, but not so commonly as the other species listed above.

Commonly found in south east Queensland, a major termite species in the Brisbane and coastal region extending to the Rockhampton region.

Nest location - Coptotermes lacteus most will often build their nest as a mound up to 2 metres above ground level, with hard clay walls.

Destructive nature - Coptotermes lacteus attacks stumps, dead trees, timber fences, poles and other timber structures that are in contact with the soil, being softened by weathering or decay. These termites are also known to attack such timber in damp sub-floor areas.

Commonly found along eastern Queensland particularly prevalent in coastal and mountain areas from the Cairns region down to the Queensland NSW border.

Nest location - Nasutitermes walkeri build their nest in trees on the main trunk or in the fork of a large branch.

Destructive nature - Nasutitermes walkeri can be destructive to damp timbers often a serious problem where the sub-floor of a building is damp and ventilation is poor with resulting wood decay or fungal growth.

Nest Location - Heterotermes ferox often build their colony nest next to stumps, logs, or other timber in direct contact with the soil where some wood decay or rotting is prevalent.

Destructive Nature - Heterotermes ferox are be destructive to damp timbers and are usually found attacking fences, poles and other timber structures subject to wood decay from weathering or from being in contact with the soil. This species is often confused with the more aggressive and destructive Coptotermes acinaciformis species. Correct identification is essential.

Commonly found in tropical Queensland generally north of the tropic of Capricorn.

Nest location Mastotermes darwiniensis build their nest (secretively) totally below the soil surface; or in the trunks and root crowns of trees and stumps. Once a nest is mature (over 100,000 or much higher) they can split off to form other nests over a wide ranging area. These sub nests are formed constantly and can sustain life for along period of time without contact to the original nest.

HIGHLY destructive Nature Mastotermes darwiniensis is one of the worlds most destructive termite species, often causing severe damage to houses, buildings, bridges, posts, poles, and many other plant and animal products. It is also an agricultural pest, responsible for ring-barking and killing living trees, shrubs, fruit, vegetable crops, sugarcane and rubber trees. It is reported to attack rubber tyres on tractors and cause damage to leather, hide, plastic or lead-sheathed cables, bitumen, bagged salt, flour, glass and various metals. Mastotermes darwiniensis is the most ancient of all the termites in the world they occur only in Queensland a termite to be feared.

Dampwood termites - form small independent nests which often attack sick or dead trees, decaying stumps or mouldy timber in the ground; they are seldom found in dry timbers in buildings.

If you find termites do NOT disturb them

CONSUMER NOTE: certain termite species if left uncontrolled can cause a severe amount of damage to a building in a short amount of time. If you find termites in or around your property, it is essential that you do NOT disturb them and promptly contact us for a termite specialist to inspect the property and advise on the protective measures available. 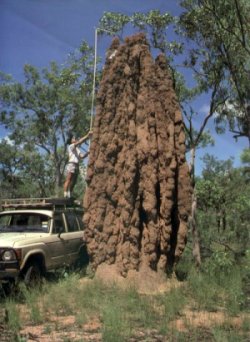 This picture shows a large above ground termite nest found in the Northern Territory of Australia. In cooler climates, most of the destructive termite species build their nest completely below ground level.

A large colony in an urban environment is most often unseen,being totally below ground level with a nest containing more than a million termites - secretly eating the inside of your timbers leaving you an empty shell.