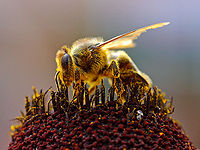 Bees are flying insects closely related to wasps and ants. Bees are a monophyletic lineage within the superfamily Apoidea, presently classified by the unranked taxon name Anthophila. There are nearly 20,000 known species of bee, in nine recognized families,[ though many are undescribed and the actual number is probably higher. They are found on every continent except Antarctica, in every habitat on the planet that contains insect-pollinated flowering plants.Common problem: Bees are a common problem during summer, often when the commercial honey bee seeks to establish a new hive inside a wall cavity of a residential or commercial premises.

Extremely aggressive: A swarm of bees can be extremely aggressive and are known to attack a person in such large numbers as to cause death. Also they are known to carry a highly toxic venom which is injected directly into the victim's bloodstream, thereby inflicting a hideous swelling of the skin, particularly of children and people with a fair complexion.

Allergic reaction: In some cases, death may arise to people who are allergic to the bee venom or who are bitten by the swarm of bees in large numbers.

DO NOT attempt to eradicate swarming bees, unless you have the complete range of protective equipment and professional knowledge essential in the circumstances.