Rats often cause electrical fires in buildings by gnawing through plastic electrical junction boxes. Rats must constantly gnaw on hard objects to cut back their constantly growing incisor teeth. In addition, they live in the most unsanitary places, and are carriers of serious health risks to humans from their droppings and constant incontinence (they use urine trails to find their way in the dark). 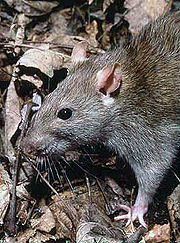 The brown rat, common rat, Hanover rat, Norway rat, Norwegian rat, or wharf rat (Rattus norvegicus) is one of the best known and most common rats, and also one of the largest. Thought to have originated in northern China, this rodent has now spread to all continents, except Antarctica, and is the dominant rat in Europe and much of North America. It lives wherever humans live, particularly in urban areas. It is a brown or grey rodent, with a body up to 25 cm (10 in) long, with the tail a similar length; the male weighs on average 350 g (12 oz) and the female 250 g (9 oz).

Selective breeding of Rattus norvegicus has produced the laboratory rat, an important model organism in biological research, as well as pet rats. It is the most successful mammal on the planet, other than humans.

The Black Rat (Rattus rattus) (alt. Asian black rat, Ship Rat, Roof Rat, House Rat, Alexandrine Rat, Old English Rat) is a common long-tailed rodent of the genus Rattus (rats) in the subfamily Murinae (murine rodents). The species originated in tropical Asia and spread through the Near East in Roman times before reaching Europe by the 6th century and spreading with Europeans across the world. Today it is again largely confined to warmer areas, having been supplanted by the Brown Rat (Rattus norvegicus) in cooler regions.

Despite its name, it exhibits several colour forms. Compared to the Brown Rat, it is a poor swimmer, but more agile and a better climber, tending even to flee upwards. It is usually black to light brown in colour with a lighter underside. A typical rat will be 15 to 20 cm long with a further 20 cm of tail. It is nocturnal and omnivorous, with a preference for grains. In a suitable environment it will breed throughout the year, with a female producing three to six litters of up to ten young. Females may regulate their production of offspring during times when food is scarce, throwing as few as only one litter a year. R. rattus lives for about 2-3 years. Social groups of up to sixty can be formed.

The House Mouse (Mus musculus) is one of the most numerous species of the genus Mus commonly termed a mouse. It is a small mammal and a rodent. In most parts of the world, they live in close proximity to humans. Laboratory mice belong to strains of House Mice and are some of the most important model organisms in biology and medicine; they are by far the most commonly used laboratory mammal.[

Where do they live and breed? Rats and mice live in drains, under concrete, in sub-floors and in garbage refuse areas, kitchens, roof voids and other areas where a potential food and moisture source is available.

Rats and mice often become a serious problem in cold winter months when they seek food and warmth inside buildings. They may suddenly appear in large numbers when excavation work disturbs their in-ground nesting locations, or their food source is changed, such as, rats feeding in school premises may enter adjoining properties during the school holidays. Rats are commonly a problem where a building is located near waterways, creeks and canals or other places where ready water supply is available.

Professional knowledge of the rodents habits is essential to eradicate a problem, for example, rats avoid bait touched by human hand - they have an acute sense of smell "cunning as a rat".

Pest control options may include the use of sticky straps, mechanical traps and the selective use of latest generation rat baits. Any rat baiting program should use safety dispensers placed in areas and is secure from access by children and pets - such as in a roof void and sealed sub-floor and/or storage rooms.
Ring the Experts for any baiting program to obtain essential rapid control using the latest safer technology. Some of the older style rat baits are in effective as the rodents have built up immunity due to the widespread use of such baits during the past 30 years.

Rodent proofing: As a preventive measure, we recommend that all potential rodent entry points into the building be sealed to physically exclude rats and mice from entering the building. In some cases, this can be carried out by the home owner or a handy man. In more complicated domestic and commercial environments, the pest controller can provide specifications and carry out rodent proofing of the premises.

Sanitation / Housekeeping: Rodent pests thrive where food and water is readily available. All food stuffs should be kept in sealed containers or rooms. Garbage and refuse should be similarly stored. Water and food bowls for the pets or otherwise should not be left out at night as this will encourage a rodent infestation in the building.