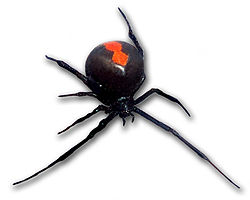 The Redback spider (Latrodectus hasselti) is a potentially dangerous spider native to Australia. It resembles a Black widow spider. It is a member of the genus Latrodectus or the widow family of spiders, which are found throughout the world. The female is easily recognisable by its black body with prominent red stripe on its abdomen. Females have a body length of about a centimetre while the male is smaller, being only 3 to 4 millimetres long. The Redback spider is one of few animals which display sexual cannibalism while mating.

Redbacks are considered one of the most dangerous spiders in Australia.[ The Redback spider has a neurotoxic venom which is toxic to humans with bites causing severe pain. There is an antivenom for Redback bites which is commercially available. 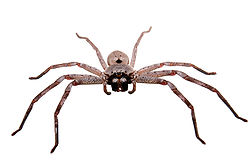 Huntsman spider is a common name given to the family Sparassidae (formerly Heteropodidae). Venom toxicity - the bite of Huntsman Spiders is of low risk (non toxic) to humans. They are a non-aggressive group of spiders. However, a large individual can give a painful bite. Beware in summer when the female Huntsman Spider is guarding her egg sacs or young. Spider Identification - an adult varies greatly around 1/2" in body length - has long legs - the diameter of an adult including legs may reach 2" - the first 2 pairs of legs are longer than rear two - it is hairy - buff to beige brown in color, with dark patches on the body. Habitat - a hunter that prefers to live under the flaking bark of trees, under flat rocks and under eaves or within roof spaces of buildings. The Huntsman Spider often wanders into homes and is found perched on a wall. It is a shy, timid spider that can move sideways at lighting-fast speed when disturbed.

Venom toxicity - the bite of the St Andrews Cross is of low risk (non-toxic) to humans. They are a non-aggressive group of spiders. Spider Identification - adult 1/4" to 1/2" in body length - abdomen striped yellow and brown - as illustrated. The St Andrews Cross Spider usually sits, upside down, in the middle of its web forming a cross - as illustrated. Habitat - this spider is a web-weaver usually found in summer in garden areas around the home. It is considered beneficial as it spins a large web to snare flying insects, such as flies and mosquitoes. 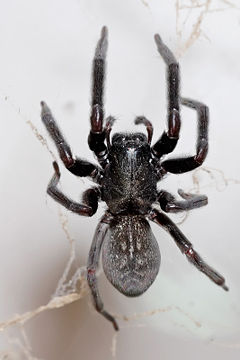 The black house spider (Badumna insignis) is a common species of Australian spider. It lives in most areas of Australia and it prefers urban habitat. Its web is a messy-looking construct of triangular sail-like shapes, usually stretched in the corner of the walls, windows etc. Somewhere in the web is a funnel-shaped entrance to the nest, where spider spends most of his time, waiting for prey. It is this feature that gets the black house spider confused with the very aggressive and venomous Sydney funnel-web spider. These two spiders do not have similar appearance, size or usual habitat (funnel webs live on the ground, house spiders high up), and the confusion is simply due to panic and ignorance.

The black house spider is venomous, but is not considered dangerous to humans, except for possible infection of the bite. They are quite shy, only coming out of the nest to capture their prey, then quickly retreat.

They seem to be quite attached to their location, and their webs look more and more untidy over time, as the spider adds to it and repairs it with different kinds of silk.

The black house spider is a favoured prey of the white-tailed spider. 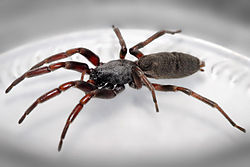 The white-tailed spider, (common species are Lampona cylindrata, Lampona murina) are medium-sized spiders from southern and eastern Australia, so named because of the whitish tips at the end of their abdomens. By comparison with other well-known Australian spiders, white-tailed spiders do not appear to be particularly numerous, but may be responsible for a disproportionately high number of spider-bites because of their habits. Unlike the black house spider and the redback which are often seen in or around dwellings in a web, the white-tailed spider wanders around and may be encountered unexpectedly. Of the 130 recently-monitored cases, several spiders had been picked up off the floor accidentally by short sighted persons thinking that they were something else. More than 60% of the victims had been bitten by spiders that had got into clothing, into folded towels and into beds. In several more cases they were in shoes.

Information on the white-tail species is limited as they are only found in Australia and New Zealand with only a limited number of researchers working in the field.